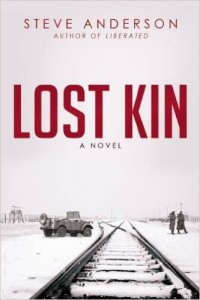 In Post-WWII Munich, the Americans and German police have control of the city. Anyone associated with Nazis or SS officers are being jailed. Those that have different nationality are being repatriated back to their country, whether they want to or not. Harry Kasper is an American officer who hasn't heard from his brother, Max, who was a German officer. Irina, a Cossack refugee asks specifically for Harry stating that she knows his brother and leads him directly to a dead German officer, dressed as an American. Harry finds himself involved with a bunch of Cossacks being hunted by the Russians, but not friendly with the Allies. If the Russians find them, they will be killed. If the Allies find them, they'll be sent back to Russia because of the repatriation agreements. Harry looks for his brother and a way to save these people.

I've read quite a few fiction books that focus around WWII. I've never read about post-WWII and the repatriation efforts. I had no idea this happened and I'm glad to have been educated on it. Anderson obviously did his research on this and the description of the politics behind it I'm sure will make anyone frustrated. There wasn't too much description of those caught in the middle since the story focused more on the characters trying to help these folks out. But the descriptions that were given made me believe it would be terrifying.

The book was a slow go. In my opinion, the main point of this book is for Harry to work with his brother to help save the Cossacks. Yet we aren't even introduced to that problem until half way through the book. The first half of the book felt like it was about almost nothing. It introduced a few characters, but didn't do a good job of keeping my attention.

Posted by HoserLauren at 9:00 AM