The Five Dysfunctions of a Team - Patrick Lencioni

The Five Dysfunctions of a Team by Patrick Lencioni
Business Management

It's hard to write a review on a book like this because it was a 'forced read'. I read it for a project in my Organizational Behaviour class, it's definately not a book I would pick up and read for fun. So do I review this book as a book to provide entertainment or as a book to suit the niche it was written for? I don't think it would be fair to me to write a review for this as a book for entertainment purposes (it wasn't that entertaining), so I'll review how well the book got out its message.
Lencioni's purpose is to show the five most common dysfunctions of a team, exercises to overcome them, and what a manager can do to help. This book is very readable. Lencioni gives an analogy to put across his message. This analogy involves a dysfunctional company that has to fire their CEO and bring in a replacement. The replacement is Kathryn, an elderly woman with little CEO experience. The team is doubtful about her abilities, but little do they know that she's an expert in bringing people together and making them work better as a team. She takes them on a retreat and explains to them five ways that teams are dysfunctional, then sets about to try and fix these five problems in her own team. The only problem? Lencioni's analogy takes up 90% of the book. He does explain what the five dysfunctionalities are and why they are considered to be so through the characters, but it is not until the last section of the book that he explains everything in details. I believe that more of the book should have been devoted to these strategies than to how Katheryn and her team worked together.
With these dysfunctions in mind, it almost seems impossible to make his theories into reality. How many groups in the world are not dysfunctional in at least one aspect? I suspect very few. In his suggestions, however, he does provide good hints on how to overcome these issues, even if it's by just a little.
I do have a problem with the price. $30 to give give me knowledge that really, if you think about it, is just common sense? That's a bit steep. It would be like paying $30 to watch an episode of Dr. Phil.

Berlin takes place in post WWII in Germany, near 'Uncle Tom's Cabin', a now American militarized zone. When dead girls start to show up, all German blondes, with blue eyes, working in the American zone and having been brutally asaulted, the German police suspect an American. They work together with the Americans to try and solve who is behind these murders. At times you're lead to believe that it's not so much as working together as it is working against each other. Whenever a girl is found murdered, Frei takes the reader on an adventure into her past up until the point where she was murdered.
It took me a fair amount of time to get through this book, so that could be part of my problem with it. There were far too many characters to keep track of. First you had to remember all of the characters from the investigation (in of itself, not too hard), but then there were characters from each of the girls background which were like miniature stories. It got to the point where I couldn't tell one character from another and that probably ruined the ending for me because I hardly even recognized the murderer's name.
Frei did a great job of transporting you back into the past and giving descriptions of what it would have been like living in Berlin during WWII. Some of the girls had it fairly easy, some were not so lucky. I particularly felt bad for Marlene, who was continuously raped and beaten.
There was also a lot of vivid sexual descriptions in this novel. I didn't feel that they added much to the story but were just there to keep the reader interested and for shock value.
During the murder investigation, there were little snippets of story about Ben, the son of the lead investigator. They were kind of pointless. They, like the sex, provided no movement for the book, and rather just made it longer. Although the dependence on the barter system was interesting to read about.

A Spectacle of Corruption

A Spectacle of Corruption by David Liss
Historical Fiction 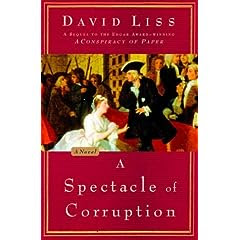 Most liked Character: Benjamin Weaver
He was great. The way he disguised himself and the way he involved other people in his quests of finding out what went on was very interesting

Most Disliked Character: Griffin Melbury
Miriam's new husband who uses everyone he can. What a dispicable character!

Best Part of the Book: The ending
It was wonderful how Weaver 'got' Dogsmill. That was very clever

Worst Part of the Book: the descriptions of the animal abuse
My stomach is not strong enough to read about these

What was missing: Miriam's story
What the heck happened to her. I thought she was more independent. No explanation of her change of character was forthcoming

Janet Evanovich steps away from the number series to write this book, which was originally titled Ivan Takes A Wife (gee, can't see why they changed it). Stephanie Lowe, ex cop, offers to take over from her cousin Lucy as a chef on the boat Savage. Savage happens to be owned by hunky Ivan Rasmussen (his name even sounds hunky!) and as the title states, it's love overboard.

Why do I keep reading romance novels? They are so corney and unbelievable! Ivan thought he loved Stephanie only about a day after being on the same boat together, even though he's a self-proclaimed womanizer. Please! I don't believe it for one second. Over a greater time period this story would be more believable. Although, Evanovich really does do a good job of painting Ivan as a hunk (yum)! And what's with Janet Evanovich and the name Stephanie? Does she have a kid named Stephanie (if so, poor kid, she's getting modelled after the hokey characters in this book!)? The cover is pretty though, so bonus marks for that!

Testing out the blook!
Posted by Lauren at 11:16 AM No comments: