The Absent One by Jussi Alder-Olsen

The Absent One by Jussi Alder-Olsen
Mystery

Detective of Department Q, Carl Mørck, is back in this second book of the series, in attempts to solve previously unsolved murders. When a file winds up on his desk of a mystery that has a suspect charged, Mørck is confused. Why would this file be on his desk if the murder was already solved? Not to let anything slide past him, Mørck sets out to investigate with his assistant Assad and his new, and annoying, office manager Rose.

The murder was of siblings by a private school for rich kids. The suspects are now wealthy and well-known members of society, with the exception of one that was killed in a hunting accident and one that has disappeared on to the streets. When the suspects find out that Mørck is investigating the case once again, they try to shut down his operation by scaring him at home and eventually going through political channels to stop him at work. Mørck is a stubborn guy though and nothing will deter him. Can he put these guys in their place?

Again, this book was more about the characters than the mystery itself. You already know who had done the killing, so the real mystery here was how Mørck was going to catch them. We still didn't learn much about Mørck's assistant Assad though he continued to be a source of humour in this book.

Definitely an interesting series and one I will continue to read.

First Line: "Another shot echoed over the treetops."

The Keeper of Lost Causes by Jussi Adler-Olsen

The Keeper of Lost Causes by Jussi Adler-Olsen
Mystery 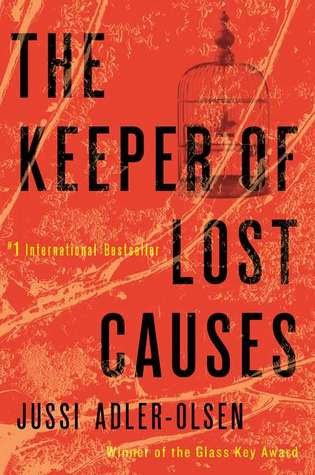 Carl Mørck is a troublemaker on his Danish homicide squad. When the government decides that it needs to create a new department to solve high profile cold cases, Mørck's bosses decide this is the perfect way to be rid of him. After he returns from leave because he was shot while investigating a murder, they set him up in the basement of the building and give him one assistant, Assad. We aren't too sure where Assad is from (though he says Syria) or what he has done in his past, but he proves quite useful in memorizing files, getting things done, and finding facts.

Assad decides that they are going to work on a case of a missing MP Merete Lynggard. She was never got off the boat on her way to Germany and is presumed to be dead. Though Mørck wants to sleep and be lazy in the basement, where no one can see him, Assad prods him to do work. Despite this, you can tell that Mørck is a good investigator, he just needs some help getting off his butt to start doing the work. Once he's on a roll though, he doesn't stop until he finds what he is looking for.

This book, for me, was primarily character driven. The dynamic between Mørck and Assad is very entertaining and you really want to learn more about Assad. Beyond this, I really liked Mørck as a character. He is smart, a bit smug, and doesn't suffer fools lightly. At the same time, he doesn't stay upset very long but rather shrugs it off with a snide remark.

The mystery itself wasn't fantastic, however the characters and the banter between them is what makes this book so enjoyable.

First Line: "She scratched her fingertips on the smooth walls until they bled, and pounded her fists on the thick panes until she could no longer feel her hands."
Would you share with mom? I wouldn't need to, she read this and wanted me to read it too!

This blog has been pretty quiet recently and unfortunately it isn't because of good news. My mom, AceofHearts, passed away from breast cancer September 17. She was reading almost up to her very last day. Mom was part of Bookcrossing, organized a book club, participated on Book Mooch, and countless other book related activities. Her book reviews will continue to live on on this blog. I won't be changing the name of it, I want to keep my mom's memory alive by continuing to post reviews here.