Based loosely on Shakespeare's King Lear, Pocket is Lear's fool, hired for the purpose of keeping youngest daughter Cornelia entertained. Pocket falls in love with her and is sad when she is sent away because she won't profess her love for her father like her two older sisters. The fortune is split between the older sisters and with the help of a ghost, Pocket devises a way to destroy them. With the help of a big oaf Drool and his puppet Jones, Pocket sets in motion the King Lear tale, told from a completely different and at time hilarious angle.

I had originally read The Serpent of Venice which is the follow up to this book. It was nice to go back for this book and learn about Pocket's background and his relationship with Cordelia. Moore has an incredible imagination. Inserting a new character in to an existing story and figuring out how to get that character to mastermind everything takes a bit of work. Even having not ever read King Lear before, I had no trouble following and enjoying this story. It was lots of fun and I'm looking forward to a third book (if there will be one) about Pocket!

Elizabeth is Missing by Emma Healey

Maud, an 82 year old lady with dementia, lives at home with a carer and her daughter coming in daily to help her. Notes are left all over the house and in Maud's pockets to reminder her of things or to remind her not to do things, like buy more canned peaches. Maud has moments of lucidity and remembers that she hasn't seen her friend Elizabeth in a while. Elizabeth is missing. The notes in her pockets confirm this, she hasn't heard from her. Maud visits Elizabeth's house, looks inside, and sees that there are boxes. She visits the police department multiple times to report Maud missing, to the point where the police officer recognizes her. She repetitively calls Elizabeth's son and she announces Elizabeth's disappearance over and over to her daughter. Why does no one seem to care?

While Maud tries to find Elizabeth in the present day, she also has flashbacks to when she was a child and her sister disappeared. The tenant in her house had some sort of relationship with her sister and her sister's husband had a violent temper. Yet no one knows where she went and when her suitcase is found in a hotel it leaves even more questions. We learn though that Maud had a theory about what happened and it presents itself in the present day Maud with an interesting cross over in past and present.

The most interesting element of this novel to me was Maud's dementia. I've never read a story before where you're in the mind of the main character whom has dementia. You read how easy it is for them to lose their train of thought and how notes don't really help because they question the notes and do what they want anyways. This could be a tough read for anyone that knows someone with the disease. My grandmother had dementia but I feel like this helped me understand why she would get upset with us when we got frustrated with her.

The less enjoyable part of this book for me was the mystery part. It wasn't all that suspenseful or surprising. When Maud started telling her story from the past I was wishing to get back to her present-self as I felt this part rather forced, trying to make the story more suspenseful than it was or needed to be.

The ending of this book was satisfying, though fairly depressing, but I couldn't imagine how to end this story without it being sad.

Thank you to TLC Book Tours for letting me be a part of their book tour.

First Line: "Maud? Was I boring you so much that you'd rather stand outside in the dark?"

In the thirteenth installment of Stephanie Plum, this time Ranger asks Plum to put a listening device close to her ex-husband Dickie. Stephanie can hardly control her animosity towards him and manages to just long enough to plant the bug, then throttles him before stealing his desk clock. Shortly thereafter, Dickie disappears and not surprisingly Stephanie is the prime suspect. Morelli, Stephanie's on-again-off-again boyfriend, is a cop and knows it wasn't her but has to go through normal police procedure. Stephanie wants to take matters in to her own hand, which will involve destroyed cars and danger.

This book didn't have as many moments where I found myself laughing but it was still lots of fun. Though I really do wish that Morelli and Stephanie would make their "thing" a little more official and grow up a bit. These books also need more Bob. He's the cutest dog ever!

First Line: "For the last five minutes, I'd been parked outside my cousin Vinnie's bail bonds office in my crapola car, debating whether to continue on with my day, or return to my apartment and crawl back into bed."

The Ocean at the End of the Lane by Neil Gaiman 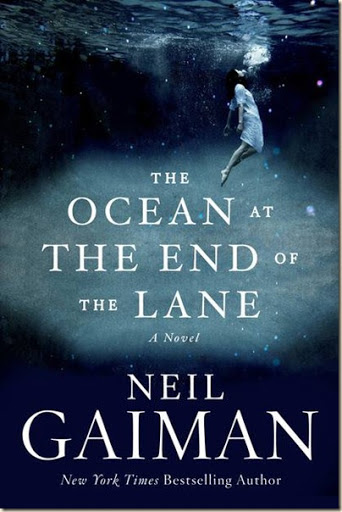 A man, needing some time to himself after a funeral, drives back to his family home and a neighbouring barn to visit old friends and their ocean at the end of the lane. Sitting in front of the pond that his young friend Lettie used to call an ocean, the man starts remembering what happened during his childhood when he met Lettie and became her friend. It all started when a miner came in to town and committed suicide in his father's car. This starts a series of events that could not have been imagined, and that the man rarely remembers, except when he visits this pond.

This book was magical. I sat down and devoured it in a day, completely transfixed by the storytelling. I didn't even realize until the end of the book that we were never told the main character's name!

The entire book has a dream-like quality, which had me second guessing what was real. Gaiman paints pictures that are so easy to see in your mind, which is an usual quality for me to find in a book.

I feel at a bit of loss for words to describe how much I enjoyed this book. All I can say is buy it and read it!

Thanks to TLC Book Tours for letting me be a part of this tour.

First Line: "It was only a duck pond, out at the back of the farm."

The Virgin Blue by Tracy Chevalier

This novel tells the story of two women, Isabelle and Ella, that share blood line but live centuries apart. Ella recently moved to France from the USA, following her husband who was relocated for his job. Knowing that she has French lineage, she wants to learn more about her past. A slightly grumpy though helpful librarian Jean-Paul assists Ella and Ella feels the lure of her French friend. Many years ago, Isabelle married someone not for love because the villagers called her La Rouse based on her red hair. They think that she's a witch of some sort. Her husband's family doesn't approve but has no choice to relent because Isabelle is pregnant. The family is chased out of their home and Isabelle's light becomes tough while she deals with a new village and an abusive husband.

I have read a few Chevalier novels before but hadn't read one for a few years. I'm happy to get back to her because I get completely wrapped up in her story telling. This story was more depressing than the others that I have read of hers but that didn't bother me.

There were some issues at the end where what the characters were doing didn't make too much sense to me based on what I had come to know about them. Despite this, I still enjoyed this novel and I'm looking forward to reading some of Chevalier's other works.

First Line: "She was called Isabelle, and when she was a small girl her hair changed colour in the time it takes a bird to call to its mate."