Artemis Fowl and LEP Captain Holly Short are back for the forth installment of the Artemis Fowl series. The most dangerous enemy to the LEP, Opal Koboi, is seemingly catatonic and being held in a hospital. Yet things start to go very wrong, an LEP official is murdered and Short is framed to make it look like she killed him. Is Opal Koboi really behind this?

This series is a light read and is always entertaining. The imagination of how the underground technology works and the banter between Mulch Diggums (a dwarf that can chew through anything) and the rest of the characters really captures my interest. I'm looking forward to the next book in the series!

Posted by Lauren at 8:18 PM No comments:

Alexis Peterson is a soap star. Just as she goes to present a Daytime Emmy award her co-star and co-presenter turns up dead and dripping blood all over her. Alexis realizes she can really help the police solve the mystery because she knows the industry inside and out. The police in the form of handsome detective Frank Jakes whom Alex has an attraction for find out there have been other similar murders of young handsome young actors. Although Jakes is only too willing to allow Alex to help, his boss and partner are not at all happy with his decision.

Alexis has some time to help out as she has sent her daughter away to a reunion because her ex is threatening to want to see his daughter and Alexis does not want this. This sub-plot was only a minor story and not resolved but I suspect will be given more time in the next book in the series.

This is a cozy mystery. The plot was a bit unsubstantial for me. Although second in a series this book could be read as a stand-alone. There was a bit of referral to the first book but nothing that hindered the read.

There are many threads in this thriller about an inclement terrorist attack that eventually find a way to weave themselves together.

There is the government intelligence centre TTIC where Hamilton Turbee works, a computer genius that is autistic. His boss is a jerk who only cares to climb to the top, pushing anything out of his way. When he's put on the case of stolen explosives (Semtex), Turbee does his best to track it down.

There is also Yoseff, an Afghani drug lord who's planning his next way to make millions of dollars. This includes stealing a few tonnes of Semtex plotting a way to destroy something in America. The amount of planning and thought that needs to be put into this is incredible.

Finally, we have Indy and Catherine, two RCMP officers from British Columbia that are chasing pot and heroin that somehow keeps going through the border, down into the USA. They end up way over their heads when they finally find the transfer point and see what exactly is being transferred.

Gauntlet ends with quite a page turner, however I was left feeling a little cheated because the book sort of stopped, rather than ended.

First Line: "So just how big a crater will it make if we blow up 660 tonnes of Semtex?"

Posted by Lauren at 8:02 PM No comments:

The Full Cupboard of Life

The Full Cupboard of Life by Alexander McCall Smith
Mystery

This is the fifth book in the No. 1 Ladies' detective Agency series. I love this series and especially Mma Precious Ramotswe whose common sense approach to life appeals to me. In this book Mma Ramotswe is a little concerned that she will always be engaged and never married to Mr. J.L.B. Matekoni. She doesn't want to pressure him but...

Mr. Matekoni has other pressing concerns as he has somehow consented to do a skydive for Mma Potokwane, matron of the orphan farm. The skydive will be a fund-raiser. Somehow Mr. Matekoni is always pulled into the schemes of Mma Potokwane.

Mma Ramotswe has been approached by a very wealthy lady to investigate her suitors and find out if they are truly interested in her or just her money.

All the problems are resolved with the common sense and sensibility that is MmMa Ramotswe's stock in trade. This is an easy cozy mystery read. The reader is always left with a smile on their face. Love love the series

First Line: "Precious Ramotswe was sitting at her desk at the No. 1 Ladies' Detective Agency in Gaborone."

The Boy in the Striped Pajamas

The Boy in the Striped Pajamas by John Boyne
Young Adult 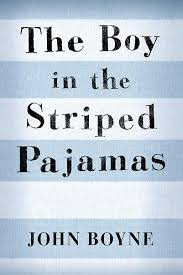 This is the story of nine year old Bruno. Bruno is a young Berliner whose father is in the German armed forces in the 1940s. He has to move for his father's work to an isolated house in the middle of nowhere. Bruno loves to explore and soon finds himself on the other side of a fence from a boy with the same birthday as himself. The other boy is dressed in striped pajamas and is hungry and dirty. All that Bruno wants is a friend.

This is a fabulous story about the naivety of the very young. I loved the wordplay also. Out-with the place that Bruno has to move to and The Fury is the head of the Nazis. Quite ingenious. However would one explain the concepts of the concentration camp to a child?

"Fences like this exist all over the world. We hope you never encounter one"

First Line: "One afternoon, when Bruno came home from school, he was surprised to find Maria, the family's maid - who always kept her head bowed and never looked up fro the carpet - standing in his bedroom, pulling his belongings out of the wardrobe and packing them in four large wooden crates, even things he'd hidden at the back that belonged to him and were nobody else's business."

The Book Thief by Markus Zusak

Liesel Meminger is brought to the Hubermann family in Nazi Germany in 1939 after her brother just died. No one explains to her why she is being separated from her mother, but her foster family of Rosa and Hans takes Liesel in and tries to make her feel like part of their family. Leisel becomes friendly with Rudy Steiner and he becomes her partner in crime. The crime is that Liesel is a book thief.

Before she even knew how to read, Liesel stole her first book during her brother's burial. As her stepfather teaches Liesel how to read and write, she falls in love with the written word and steals more books as she needs them.

Set with WWII as the backdrop, this book brings an interesting perspective to the war, which is that of a teenage German girl with Jewish sympathies. The relationships between the characters is what makes this book such a page turner. Yet at the same time, you know that the story is not going to end happily and you wonder just what is going to happen.

I know I'm a little late to read this book. I think it was a top seller a few years ago. I'm happy to have gotten around to it now though, it was a great book and I would recommend it!

Posted by Lauren at 8:25 PM No comments:

Rebus is back!!. This time there are a bunch of cases. There is the stakeout of a man who might be connected to crime boss Cafferty. There is a colleague who gets bashed in the back of the head. There is a butcher who is stabbed. In the middle of all this, Rebus's girlfriend kicks him out and his ex-con brother needs a place to stay. This means that Rebus is sleeping on the couch in the place he had rented to students and his brother gets a closet to sleep in.

I found that the number of things happening were just too many to keep straight. It was still a great mystery but just too cluttered.

First Line: "There were two of them in the van that early morning, lights on to combat the haar which blew in from the North Sea."