Mother of Pearl by Melinda Hayes

In the 1950's, small-town Mississippi, there were still racial divides. In the coloured part of town is Even Grade, a black man who is an orphan and only a few friends. Across the river is Valuable Korner, whose grandmother recently passed away so her mom came back to take care of her but is known to the whole town as a whore. The story revolves around these two and eventually their stories merge. Val is experiencing teenage love with her only friend Jackson and becomes pregnant right before he leaves town when his family moves. Even tries to hook up his elderly friend Canaan and falls in love with Joody who can see things that will happen in the future.

This book is part of Oprah's book club, and as such I expect a bit of a slog through the book but with reward at the end. This is probably one of the worst Oprah's books I've read. The writing is unnecessarily heavy and it takes forever to get through when it really doesn't have to. The story could have been much simpler, with less characters, and probably could have resulted in the same end result.

I feel like there was lots of alternative meanings and symbolism included in this book but the reader has to work much too hard to figure it all out. I'm a rather lazy reader. I want to be entertained by a book and don't want to think too hard on it. This book didn't give me this at all. And because I wasn't willing to do the work to figure it out, I didn't understand all of what was going on. I'm actually surprised at myself that I finished the book.

From the other reviews I've read, it looks like this is a love it or hate it book so I guess I'm on the hate it side!

First Line: "EvenGrade walked past the spot on the bridge where Canaan caught the bottle with his head and saw the blood mark was still there, but just barely."

The Kept by James Scott 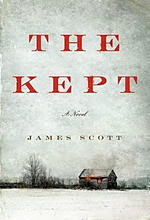 It's 1897 in upstate New York in the dead of winter when midwife Elspeth Howell returns to her home to find her husband and all of her children shot and killed. As she starts to clean up the house and get a fire going, she is blasted back from a shot. Elspeth's only surviving son hid in the closet and, thinking the murderers had returned, shot through the door. Realizing it's his mom, 12-year-old Caleb quickly gets to work on digging out the pellets and making sure his mom survives the night. She pulls through and the two set out on a quest to find the men who did this.

Their quest takes them to a town where Caleb was born, and he realizes a secret that his mom has been keeping for him. As the two try to find revenge, they also must find work to sustain themselves. Elspeth working as a man picking at ice and Caleb at a brothel, knowing that the murderers have been seen there.

This story was about many different things: family, revenge, sin, redemption, and winter. It's not often that you read a book where the cold seeps through the pages. The times are bleak and cold, the characters are bleak and cold, and their surroundings the same. Scott did an excellent job of tying all these together with the winter theme.

The characters were a bit difficult to get used to. Caleb, the 12 year old who had never seen the world was the most realistic. He wanted revenge for his family and answers from his mom. While I felt that the question should be whether Caleb could lose his innocence to take revenge, at times this question seemed to drop away which didn't make much sense to me. The bigger question mark of characters was the mom Elspeth. She seemed to just be a drifter and have no true convictions. She seemed to just follow along with her son for wanting revenge but I wasn't convinced of the reason because she was rather wishy-washy on it.

If the ending had knocked me off my socks I think I could have forgiven Elspeth for her lack of conviction throughout the story, but in the end it all fell rather flat for me.

Thank you to TLC Book Tours for including me on this book tour!

In the 12th book of the series, Stephanie Plum, bounty hunter extraordinaire, is back and trying to pick up the long list of criminals that haven't appeared for their court date. Then Stephanie runs in to Ranger's wife and she's not happy. Who knew Ranger had a wife? She knows that something is going on between Ranger and Stephanie and stays on Stephanie's tail, deciding that Stephanie will lead her to Ranger. But Ranger has left to Miami and soon there's news that his kid had been kidnapped. Stephanie tries to find out what is going on, with the help of on-again, off-again boyfriend Morelli.

These books are always such great pick-me-ups. Reading this book on the train, there was a page where I was shoving my face in to my scarf to stop from laughing out loud. Though in the past few books, it feels to me like Stephanie has been running from someone that wants to kill her. It would be nice if things got switched up a bit.

First Line: "When I was twelve years old I accidentally substituted salt for sugar in a cake recipe."