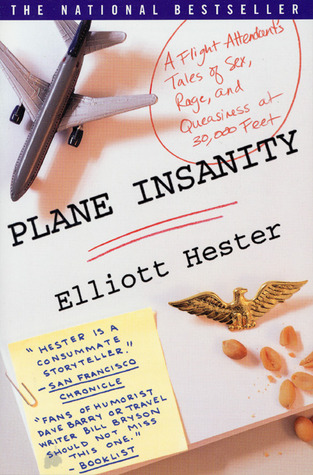 Elliott Hester is a flight attendant for a major American airline. He flies all kinds of routes, though many of his stories seem to include routes to South America. He lets us know what it's like to be a flight attendant and all the quirky stories that go along with it. The stories range from funny to gross. It's an interesting look in to this life, which you would normally only see for a few hours at a time.

Having just finished a book that looked inside the world of waiters (Waiter Rant), it's hard not to draw comparisons to this book. And unfortunately for this book, I found Waiter Rant better. There were a couple of reasons for this.

First, I found like Hester had no passion for what he was doing. He worked this for a job and then expected us to care about what he did in his job. As a result, you only care about the stories but not much about Hester himself. Some of the responses he gave customers I would consider unprofessional given the industry he's in. Sure, some of the customers are jerks and deserve worse, but in the service industry you still need to be polite to people (up to a certain point, I guess). Hester seemed snippy with most everyone and it just made me glad that I've never been on a flight with him before.

The second is Hester's continuous negative description of people. For example, there was an incident on one of his flights where a flyer has a heart attack so they call for a doctor. There is a doctor, but apparently he's fat. So Hester says the doctor waddles down the aisle like a pregnant lady and then every time this doctor is mentioned again, he's called some form of fat. Why? The doctor wasn't even a major player in the story, nor had he treated anyone poorly.

All in all, I think Hester's a bit of an ass himself, which made it hard for me to like this book.

First Line: "I never wanted to be a flight attendant."

In another blog-to-book, Waiter Rant examines the operations at the front of the house for a restaurant. Steve finds himself out of work in his thirties and not knowing what to do. His brother gets him a waiter gig at the restaurant he's working in and Steve carried on in this career for many more years than normal. He eventually becomes the head waiter at a restaurant he calls simply 'The Bistro'. It's an upscale Italian restaurant. There are many tales: funny, horrifying, sad, uplifting, I could go on. This book has been billed as the waiter version of Kitchen Confidential, which I haven't read so I can't compare to. But I get the feeling it doesn't quite measure up.

If you start this book with the understanding that you're going to be reading fluff, you'll be ok. It's fun fluff. There isn't too much substance. There's a little bit of self-righteousness. You have to let it slide. This waiter does try to tell you how you should act at a fine dining establishment. As someone who is pretty certain I have never caused problems for a restaurant, it did annoy me a little. But I let Dublanica's preachy parts just slide on by and enjoy the juicy bits. I enjoyed hearing about some of his stories and it was an interesting look in to the restaurant business, but it was still just fluff.

Once Upon a Lie by Michael French 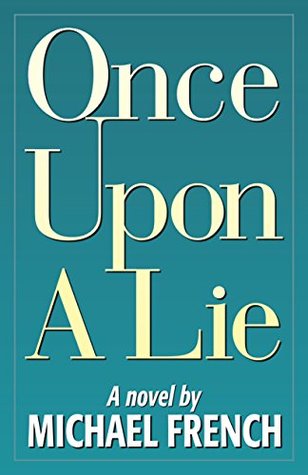 This is the story of two teenagers from completely different backgrounds. The first is Jaleel, an African American from a small town who witnesses his father kill his mother and then himself. The police decide that Jaleel is the murderer and rather than trying to clear his name, he flees. He meets a man on the bus who helps him out, providing him a new identity so we can start a new life in LA. Jaleel is a smart kid with a knack for baseball, which allows him to carry on in school and get accepted to a top tier university.

Then there's Alex. She comes from a privileged family, in a wealthy neighbourhood of LA. Her dad is a successful criminal lawyer, her mom a socialite that likes to put on the best party. Having an adventurous nature, Alex happens in to Jaleel's neighbourhood and they start talking. They hit it off and Alex wants to return as soon as she can, but she finds out that her mom is having an affair with her dad's best friend and eventually her dad finds out too. Alex convinces Jaleel to help her warn off her dad's friend, which puts them all in a bad situation.

French does a great job of writing these two teens. Alex felt particularly real to me. She had a great head on her shoulders for a teen, but she wasn't so mature or insightful that you couldn't believe her age. She was worried about some things that teens worry about, which added to her realness. Jaleel was a bit of a harder nut to crack because of how guarded he was from all the horrible things he had been through. I liked him, but it felt like there was less time dedicated to him so I couldn't get as much a feel for him.

The adults are another story. All of them are pretty pathetic. Alex's dad has no ethics or values, Alex's mom is the most selfish person in the world that completely abandons her kids, all the cops are blind to the clues in front of them and the lawyers are no better.

This interesting mix of characters makes for a page-turning novel. There are unexpected twists and turns through the whole thing and a very realistic ending. The only thing this book needs is a cover worthy of the story inside!

Win a digital copy of Once Upon a Lie!
Posted by HoserLauren at 8:00 AM 1 comment:

Nick Stone agrees to one last operation in order to get his papers for the USA and be with the girl he loves. His mission is to travel to France, meeting up with two Egyptians that will help him. They are to track a boat to one of the ports and then follow the men when they leave the boat to collect three payments. These payments are being sent back to families from terrorists that are planning something in the Western world. If they capture the men the money is coming from and blow up the money before it makes it back to the Middle East, they can stop the terrorists and also learn who they are.

Everything is incredibly methodical with Nick. He scouts out locations days in advance, removes wrappers from food so they don't make noise, and takes anything with him that might leave a clue that could lead back to him.

This is the 5th or so book in the series and the previous books have been great for being action packed and believable. This one is my least favourite in the series. It was mostly prep work which made it a rather slow go. Nick and the team spent all their time getting ready and then when the team finally arrived, the action was crammed in the last few pages of the book. The end was exciting but it would have been nicer if some of that replaced some of the beginning to weigh the book better between set up and action.

First Line: "The submarine had broken surface ten minutes earlier, and its deck was still slippery beneath my feet."

Little Women by Louisa May Alcott

This classic novel tells the story of the four March sisters in 1860s New England. Their father is off at war so it's just the four of them and their mother, trying to make the best of everything. Christmas is tough and instead of buying things for each other, the girls buy for their mother and give their lunch to a family that has little to eat. Their neighbours hear about their good deeds and send over treats. This sparks up a relationship between the boy Laurie that lives beside them.

I've seen the movie for this book and really enjoyed it. I had started and stopped the book a few times but this time stuck with it. I know this is going to be an unpopular opinion, but wow was this book boring! It's hardly about anything and hardly anything happens. Three of the four sisters have boring personalities. Jo is the only redeeming factor of this book but even she isn't enough to save it.

First Line: "'Christmas won't be Christmas without any presents,' grumbled Jo, lying on the rug."