Witness in Death by J.D. Robb

Lieutenant Eve Dallas is back for another ".. In Death" book. This time she's taking in a play with her husband Roarke when a fake knife is swapped out for a real knife and the lead male character is killed. Everyone on stage and behind the scenes is a suspect as Eve learns what a womanizer the victim was. Everyone seems to have motive but the situation becomes even more serious when the stage organizer is also murdered. The cast believe bad things happen in threes, can Even find the killer before anyone else is murdered?

Despite this book being the tenth (I think) in the series, the chemistry between Roarke and Even doesn't get old, neither does the banter between Eve and her aid Peabody. I'd like to see them bring in Trueheart, the rookie, more in the upcoming books and move a relationship up to the next level. A baby for someone (Eve or Mavis maybe?).

As always, looking forward to the next one.

First Line: "There is always an audience for murder."

Posted by Lauren at 9:07 PM No comments:

The 19th Wife by David Ebershoff

The 19th Wife flips between a modern day murder mystery within a polygamous family and 1875 with Ann Eliza, the 19th wife of Brigham Young. In present day, an ex-communicated member of the church Jordan comes back to Utah after his mother is accused of killing his father. Jordan is a member of the First Latter-Day Saints and was kicked out after found holding the hands of one of his many step-sisters from his large family. Jordan is hesitant to come back to a place he's put behind himself but he wants to find the truth.

At the same time, the story follows Ann Eliza Young, the 19th wife of Brigham Young who divorces Brigham and turns her religion upside down. Her story is told from many different perspectives including her own autobiography, her dad's story, letters from her son, essays from scholars, and others. Ann Eliza argues that no woman could possibly want to be in a plural marriage if given the choice and not told that their salvation depends on it. Brigham Young states that he has been told that plural marriage will ensure your salvation and the (in my opinion) ridiculous argument that with plural marriage, the sin of adultery is eliminated. Of course it is.

This book gives an interesting look into the First Latter-Day Saints; both historically and present day. I found it easier to connect with Jordan than Ann Eliza because Ann Eliza felt more distant, maybe because she was trying to protect herself? I felt like there were a lot of unnecessary characters in the novel though. Jordan picks up a runaway who is also an ex-communicated Firsts member who really doesn't add much to the story. Furthermore, despite the entire book being quite engaging, I was disappointed in the ending and found myself skimming through it.

First Line: "In the one year since I renounced my Mormon faith, and set out to tell the nation the truth about American polygamy, many people have wondered why I ever agreed to become a plural wife."

Posted by Lauren at 8:32 PM No comments:

Lindy Haggerty is the rehearsal director for the Jeremy Ash Dance Company and they are set to perform in Atlantic City at the International Stars Ballroom Competition. Dawn Gilpatrick is quick to clue Lindy in on the latest gossip and politics of the dance world, including the fact that her ex-husband and ex-partner is trying to steal her best couple, Shane Corbett and Katja Abdretevsjty.

Shane is found murdered wearing an Enrico dress and Katja is missing.

In the meantime someone has broken into Enrico's booth and destroyed all his designer gowns. And if that were not enough Lindy's boyfriend Bill Brandecker, a former New York detective comes to spend a little time with her. Lindy is unsure of the relationship because she still isn't sure what the status of her marriage with Glen is. Glen has stated he is not returning to the marriage but Lindy is soooo confused.

This book is full of catfights, scandals, lovers' tiffs and twists and turns. It is labelled a cozy mystery but be forewarned the perpetrator is known about 2 minutes after the murder is discovered.

The Breathtaker by Alice Blanchard
Mystery

Promise, Oklahoma is hit with a devastating tornado. Police Chief Charlie Grover finds three mutilated corpses in a farmhouse and thinks the tornado has done immeasurable damage until he looks deeper and proves they were murdered. Detailed police work uncovers that this has been going on for some time. Someone can predict the exact path a tornado will take and during the height of that storm commit an egregious act of murder.

Could the murderer be one of the storm chasers? Charlie teams up with Dr. Willa Bellman and finds himself in this high-tech thrill seeking world. Charlie's father is a storm chaser. Could he be the murderer?

I found this book to be equal to the thrill of the storm chaser but there do seem to be a few inconsistencies in technicalities of tornadoes and geography.

The Good Husband of Zebra Drive 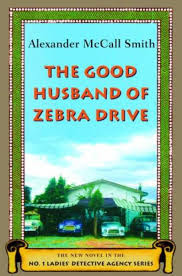 This is a book of change in the Ladies' Number One Detective Agency. Mma Makutsi is undergoing the biggest change. Her impending wedding is approaching and she realizes she need no longer work. She wants to grow in her work and feels she does not need to take the rudeness of Mr. J.L.B. Matekoni's apprentices so she quits.

Mr. J.L.B. Matekoni thinking detective work must be very easy and wanting to help his wife takes on the case of a woman who feels her successful husband is cheating on her.

Charlie, one of the apprentices, thinks he is no longer interested in mechanical work and wants to start a taxi business but he needs some help which Mr. J.L.B. Matekoni provides.

Mma Ramotswe takes on a baffling case where people die in the same hospital bed on Fridays. Is the bed cursed? What is going on?

This book provides quiet laughter and surprising gentle twists and turns. Like a good friend I keep on returning for more enjoyment and company

First Line: "It is useful, people generally agree, for a wife to wake up before her husband."

Monique and the Mango Rains

Monique and the Mango Rains by Kris Holloway
Non-Fiction

Kris Holloway becomes a Peace Corps Volunteer in a small town in Mali. She is hosted by Monique Dembele who runs a health clinic and well baby clinic. Monique is the mid-wife in a place where childbirth is anything but simple. Monique weighs babies and then dispenses information on how to keep those babies well nourished and healthy. Poverty and hard work are the mainstay of this village.

Kris is built a house by the people of the village, a mud hut with an iron corrugated roof. She is immersed in the culture of the area and becomes life-long friends with the irrepressible Monique.

It was interesting to discover about the culture of West Africa and read about the life and work of a Peace Corps volunteer.

First Line: "Your two-year assignment is in the country of Mali, West Africa."

The White Bone by Barbara Gowdy

Mud is an orphaned elephant who is separated from her family and is adopted by the She-S herd. As Mud is coming into her adulthood, the elephant domain is going through one of the worst droughts in history. As the elephants meet at a watering hole, many are killed by ivory poachers. The elephants that do escape alive are separated. Mud is stuck with a small group from her adoptive family as they try to find other family members and search for the white bone, which has the power to tell all elephants where to find the second safe place, where there is water and lush vegetation where elephants will be safe.

This book is very unique in that it's told from the elephant's perspective. They can communicate as humans do through their own language but they have other means of communicating as well. They can send out infrasonic waves and each family has a mind reader. The mind reader of the family can communicate to other species, which is useful when trying to find water during a drought.

I've never read a book where the main characters are elephants. Despite being so different, the human emotions of each elephant draws the reader in quickly. I enjoyed how the elephants were named according to their family name and their prominent character traits. Each elephant lived up to their name! I was quite surprised to find that the author is a Canadian author living in Toronto! I wonder how much research she had to do about elephants before writing this book.

First Line: "All day there are glaring omens that go undetected."