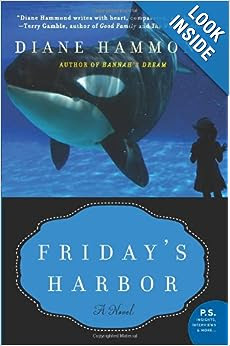 Friday is an orca slowly dying at a facility in Columbia due to inadequate food and poor living conditions. The Max L. Beidelman Zoo decides to save him and transport him to their newly created pool at the zoo. The whole team is worried that Friday may not survive the trip but he does and then the real work begins. Executive director of the zoo Truman hires a marine mammal rehabilitator Gabriel to slowly help Friday become a healthy whale. Truman's girlfriend Neva and aunt Ivy also help with training and the financials. There's also animal communicator Libertine who hears Friday when he first moves to the zoo and comes to see if he needs help or wants to communicate more.

This story is a heart-warming story of how people come together to help a mammal in need. It also gives great insight in to how the rehabilitation program works with whales and what their personalities are like. Friday is just as much a character in this book as any of the people. It's impossible not to smile while reading about how Friday would float at the windows staring at kids coming to watch him at the zoo because he is just as fascinated with them as they are with him.

This book also addresses the more serious issue of freedom versus captivity for animals. Many different opinions are presented. I was interested in hearing how the rehabilitators aren't sure that an animal in captivity for so long could survive in the wild without the assistance of humans. It is a good point and you wonder if it would actually be cruel to let animals raised in captivity back to the wild because they couldn't even feed themselves.

I really enjoyed this book and would go back to pick up the first in the series, Hannah's Dream. This was a nice, light read.

Thank you to TLC Book Tours for letting me be a part of the book tour.

First Line: "In Bogota, Columbia, a twenty-one-foot-long, nineteen-year-old, North Atlantic-caught killer whale swam around and around."

I hope you enjoy Hannah's Dream just as much as you enjoyed this one. Thanks for being on the tour!