Victoria and Albert by Evelyn Anthony 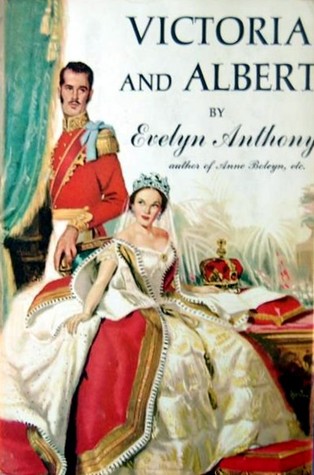 Queen Victoria ascended to the throne of England at the young age of 18. Despite having powerful female rulers in the past, it seemed that England still wasn't used to one and wanted Victoria to marry as soon as possible to have a husband help her with policy-making. Victoria doesn't seem all that interested in marriage and having a man to rule over her until she meets her cousin Albert. He's incredibly handsome and Victoria falls in love with him right away. The two set to marry.

Victoria is very happy. She has Albert by her side and she is very friendly with the English Prime Minister. However Albert doesn't enjoy his new lifestyle all that much. Albert doesn't love Victoria but realizes its his duty to be a good husband. He feels worthless with the very little that Victoria allows him to do. This is the story of their marriage from when they meet until when one of them passes away.

I haven't read much on Queen Victoria in the past so I don't know much about her. This book portrayed her as rather rigid but also completely tunnel visioned about her friends. There is no grey with Victoria. It's all either white or black. She loves someone or she hates them. It's tough to see how someone could rule a nation with that kind of mentality.

This is an interesting look in to Victoria's early reign and her relationship with Albert, though it was a bit slow at times.

First Line: "A footman has opened the shutters on two of the long windows in the Green Drawing Room at Kensington Palace, and a pale predawn light spread through the room."