Songs of the Humpback Whale

Songs of the Humpback Whale by Jodi Picoult
Fiction/Literature 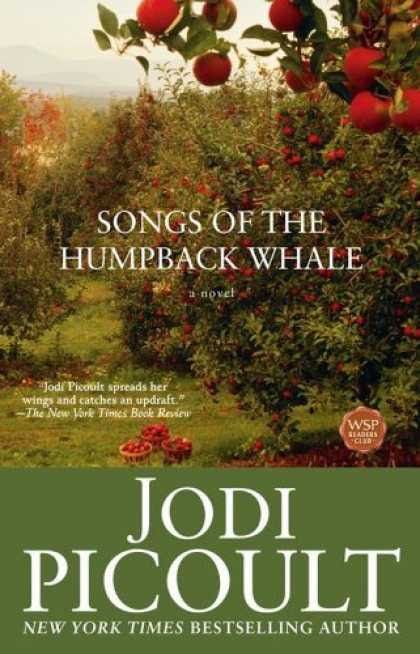 Jane Jones is a speech pathologist living in California with her famous husband, Oliver. Oliver researches songs of the humpback whale and find repetitions and when they sing. He has become world renown. Oliver has become so immersed in his research, he has little time to devote to his family.

When Jane gets into another one of their arguments, she actually hits Oliver this time. Horrified because she had an abusive father, she runs away. Her daughter, Rebecca , age 15, accompanies her.

Jane contacts her brother, Joley and wants to visit him. He gives her directions day by day driving her across the country and making her see points of interest. One of the points of interest is in Iowa where Rebecca survived an airplane crash when Jane had left Oliver another time and put Rebecca on the plane to return to Oliver alone.

Finally Jane and Rebecca arrive at the apple orchard in Massachusetts. Joley is working there alongside the owner, Sam and his assistant, Hadley, both 25. Jane falls in love with Sam and Rebecca with Hadley.

This novel was written in 5 voices. But the time frames are different as some are forwards and Rebecca is backwards. Although I did enjoy the book, it was not as good as some of Picoult's other books. There were some glaring problems. Hadley being so much older than Rebecca puts his actions in the realm of statutory rape, yet no one seems to worry about this aspect. The trip across the country is the most chaotic trip ever, with backtracking and sometimes it felt like it was the most indirect route available that was taken. The ending was hurried and as far as I was concerned not at all either satisfying or explained.

First Line: "In the upper right hand corner of the photo is a miniature airplane that looks as if it is flying right into my forehead."