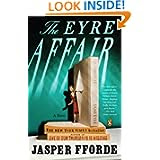 Thursday Next lives in an alternate world where the Crimean War still wages and England is not an empire but just a country and Wales is a Leninist state.

The villian, Acheron Styx, is as evil as they come and has stolen an original manuscript of Dickens and is holding the characters up for ransom. When this Machiavellian plan goes awry, Styx moves on to Jane Eyre. Thursday pursues Styx outside and inside the novel in order to fight this evil.

There are a lot of play on words, maybe too many but still fun to catch and chuckle about. This book was okay. Will I read another in the series. Yes, but. I just can't put my finger on what I didn't like but to say it was a little bit too much. As a side note the reader does not have to have read Jane Eyre but it will increase the enjoyment if you have.

First Line: "My father had a face that could stop a clock."