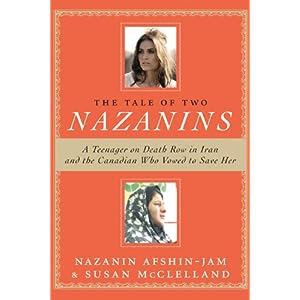 Nazanin won Miss Canada in 2003 and was heading out to China to compete in Miss World with many questions in her head. How could she use the platform of competing in Miss World to do better in the world? How could she convince people that thought she was negatively impacting young kid's body image that she believed in outer and inner beauty? Nazanin walks the reader through her times in China and how she won second place in the Miss World competition. When she comes home, there's an email telling her that a teenager with the same name is being held in Iran, about to be put to death, for murdering a boy who was attempting to rape her and her niece. With Nazanin looking to make a difference in the world, and given that her heritage is Iranian, she takes this cause on.

The story of Iranian Nazanin is heart-breaking. Growing up poor, she was never given many chances in life. All she wanted was to learn to read, be able to tell stories, and become a school teacher. She was continuously pulled out of school to help her mom bring up her siblings or when her father was almost killed. As a teenager, Nazanin is out with her close friend and niece when some boys follow them to a field and attempt to rape them. Holding a knife in her hand, Nazanin stabs one of the attackers and kills him. She is charged with his murder and sentenced to death.

Though I've read many books about Afghanistan and Iraq about the injustices that happen to females there, I'm still continuously surprised by how societies treat their children and women. This book does a good job of showing the atrocities that some of the women have to go through. I really enjoyed the Iranian Nazanin's story and found it captivating to read.

I also quite enjoyed the ending of this book. With fiction novels, everything usually ends up just the way you want it. In this case, it doesn't. Connection between the Nazanin's falls off, though many requests for money are sent. And there are so many other teenagers on death row in counties in the Middle East that follow the same laws as Iran that it's almost insurmountable. Canadian Nazanin seems to be keeping up with the cause, and I applaud her for that.

First Line: "I was sitting at the computer desk, wedged in between the kitchen and the dining room in the downtown Vancouver condominium belonging to my sister and her husband."