The Girl with the Clock for a Heart by Peter Swanson 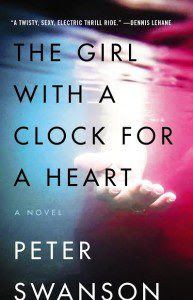 George Foss is having drinks with his on-again-off-again girlfriend when he notices a familiar face at the bar. It can't be Liana. She's on the run from the police and George hasn't seen her since college. George drops his girlfriend off and then circles back to the bar to see Liana. It is her and she needs George's help. George can't help but remember the one semester they shared in college together. The two shared something special and George hasn't been able to find anything like it since. But he knows she's dangerous.

Liana explains that she just needs George's help to return some money to an ex-lover. It's a simple ask, with no risk. Except nothing with Liana is no risk.

The book flips between the present day and the past. It did a good job of providing good background from the past before continuing on in the present. The way the chapters of the past ended definitely made me want to keep reading. I'm not sure I would call them cliffhangers but they were good at driving the plot forward.

The history between George and Liana was described as quite steamy yet something was missing for me as to why George would offer to return money for Liana. I kept thinking that I would say no if I were him. That would be the end of the book though, wouldn't it? I'm not sure what else could have been added to help me accept this as I'm not entirely sure why I felt like I would have said no right away. This also was an overall problem I had with the characters. I never understood Liana and her problems and I never cared much for George.

By the time I got to the end of the book, I felt like far too much had been left to chance to be even the slightest bit believable. Even the characters describe it as such! The ending was a "hail mary", with the characters just hoping that everything would work out. I wish the ending had been a bit smarter so that it was believable what had happened.

Despite this, there was enough tension to keep me flipping the pages and wondering what is going to happen next. This would make a good beach read. It's easy to get through, doesn't require too much thought, and is a page turner.

First Line: "It was dusk, but as he turned onto the rutted driveway he could make out the perimeter of yellow tape that still circled the property."

This does sound like a great beach read, although I'll be sure NOT to pick it up when I'm supposed to be watching the kiddos. It's better for when I'm on my own!