The Gardens of Kyoto

The Gardens of Kyoto by Kate Walbert
Non-Genre 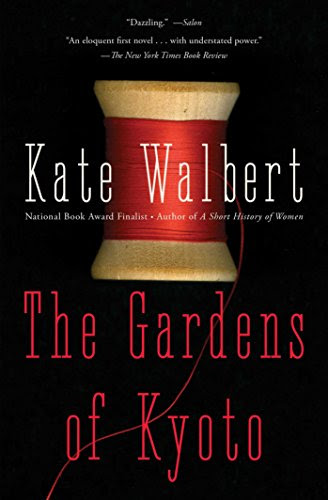 I had a cousin, Randall, killed on Iwo Jima. Have I told you?

So begins Kate Walbert''s beautiful and heartbreaking novel about a young woman, Ellen, coming of age in the long shadow of World War II. Forty years later she relates the events of this period, beginning with the death of her favorite cousin, Randall, with whom she shared Easter Sundays, childhood secrets, and, perhaps, the first taste of love. When he dies on Iwo Jima, she turns to the legacy he left her: his diary and a book called The Gardens of Kyoto. Each one subtly influences her perception of her place in the world, the nature of her memories.

Moving back and forth through time and place, Kate Walbert recreates a world touched by the shadows of war and a society in which women fit their desires into prescribed roles. Unfolding in lyrical, seductive prose, The Gardens of Kyoto becomes a mesmerizing exploration of the interplay of love and loss.

My review:
This book is a very lyrical look at a young girl coming of age in the era of the 1940's and 50s. It starts out with the death of her cousin and his bequeath to her. The story changes time a fair bit and this detracts from the story as the most curious of us want to know the story now and not interspersed between time periods. Although well written the story is not fully told ever
My favourite Character: I didn't really have one
My Least Favourite Character: Daphne. Because she became exactly what she didn't want to be
Best Part of the Story: When Ellen goes to meet Sterling for the last time and goes to see the old house
Worst Part of the Story: The type of men Ellen picks
What was missing: Coherency. I felt that the time shifts made the story telling too prolonged and hard to keep track of. It felt like the book was dragging