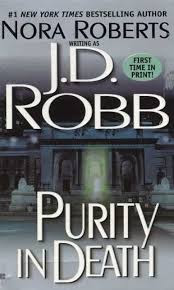 Louie Cogburn, a small time criminal, has been suffering from an increasingly bad headache. His neighbour knocks on the door to tell him to turn down his music and Louie answers with a baseball bat swinging. The first policeman at the scene, Trueheart tries to stun Louie and ends up killing him. The message on Cogburn's computer reads "Absolute Purity Achieved".

Eve Dallas is assigned the investigation. Nothing explains the man's rage or why a stun caused his death. When a second murder under the same circimstances takes place, the police start to wonder if a computer virus can be transferred to humans.

Again, Roarke helps out in the technological area.

The sub-plot of Peabody and McNab is wonderful. McNab has been rendered paralytic and wants to end it with Peabody as he now considers himself useless baggage. Peabody is as loyal as they come and refuses to even consider it. This makes for a great side story.

This is another great one. I loved the idea of a computer as a murder weapon.

First Line: "The heat was murder."